The use and making of icons entered into popularity in Kievan Rus, following the regime’s conversion to Orthodox Christianity in AD 988. As a general rule, these icons strictly followed models and formulas hallowed by Byzantine art and Constantinople. As time passed, Russians widened the vocabulary of types and styles far beyond anything found elsewhere in the Orthodox world.

Russian Orthodox of Icon of the Virgin of Dawn, or Our Lady of Ostrabama. The original is housed in the chapel of the Dawn Gate of Vilnius, Lithuania.
Add to cart
Virgin of Dawn Icon
$50.00

Intricately beaded Russian Orthodox icon of the Blessed Virgin Mary with the Child in one hand and a blooming lily in the other. This version of Mary is called the Unfading Flower, symbolizing her purity and chastity.
Semi precious and faux stones, h
Add to cart
The Unfading Flower Beaded Icon
$120.00 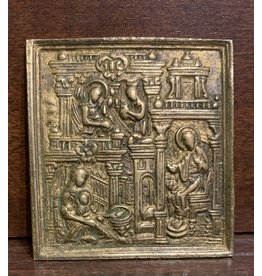 Large Russian Icon with multiple depictions of the Nativity, Mother and Child. Made in Russia.
Add to cart
Russian "Nativity Tree" Icon
$75.00